Image without correction – note how the room is distorted

Funny isn’t it, how our brain interprets what we see, but a photograph needs some help? When we look upwards at a tall building, the top is further away than the bottom, so appears smaller, but our brain compensates for this, and it all looks ok.  Take a photo of the same scene, with the camera tilted upwards, and in the 2D view we see, the building looks like it is toppling backwards – our brain only sees what is in the photo, not what it ‘wants’ to see.  This is called ‘keystoning’ and even a slight camera angle will show this effect. It’s the same in the horizontal plane too if we take a photo where the right or left of the scene is further away than the other. It’s even more ‘odd’ if the camera is pointing slightly downwards, as shown in this example.

Image corrected but not cropped

Photo processing software like Lightroom has a tool for ‘correcting’ this keystone effect – it ‘bends’ the image so the verticals appear upright, and all looks natural again. It works pretty well, but you then need to ‘crop’ or trim the image to remove the white space at the corners, and so you lose some of what you photographed at the extreme edges. Specialist lenses have been available for years that can deal with this effect in camera, but they are hugely expensive, and pretty tricky to use.

Image corrected and cropped in Lightroom

Enter the Pen-F with its ‘keystone compensation’ feature.  Activate this, and you can actually then do the compensation when you take the photo, so ‘what you see is what you get’ afterwards. Hold the camera to get the angle and composition you want, and twiddle the rear control knob until the verticals line up, and press the shutter button.  It takes a second or so to process, but then ‘voila’ – there is the corrected image on the screen. Its a bit easier to do if the camera is on a tripod as you can more readily make fine adjustments, and the camera only produces a keystone-corrected JPG image rather than RAW file. 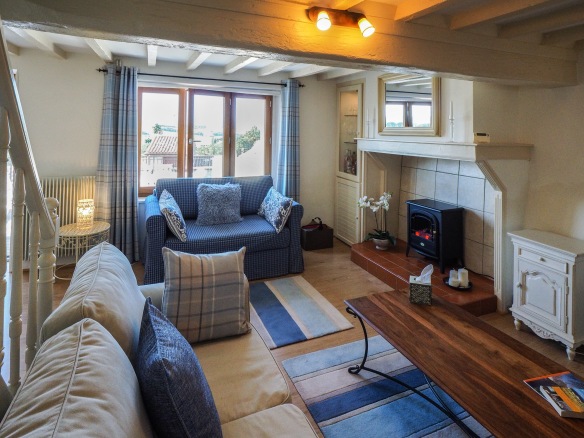 JPG image corrected in camera, with minor adjustments in Lightroom

So maybe the image quality isn’t as good as shooting an uncorrected RAW file and correcting it afterwards in Lightroom, but if space is tight, you don’t want to risk losing a critical bit of the photo when processing. Going back and shooting the shot again isn’t always an option. Also, the time saved can be better used to make some final ‘tweaks’ or adjustments to enhance the image.

For shooting architecture etc, this is a ‘killer’ feature, and currently unique to the Olympus OM-D and Pen-F cameras.