Tongue Hotel turned out to be a good choice (to be fair there aren’t many hotels around here anyway!) – one of our fellow guests was BBC’s Jeremy Paxman, so we figured if it was ok for him, then it was ok for us. A (relatively) early start next morning as we had to be in Dunnet Bay by 11am for our pre-booked tour of the Dunnett Bay Distillery – home of Rock Rose, one of our favourite gins. Our tour (we were the only ones there) took almost an hour and a half, and we learned so much about the gin process, helped along by sampling several of their products! Definitely worth a stop if you are passing that way, and well worth the £12 pp cost. 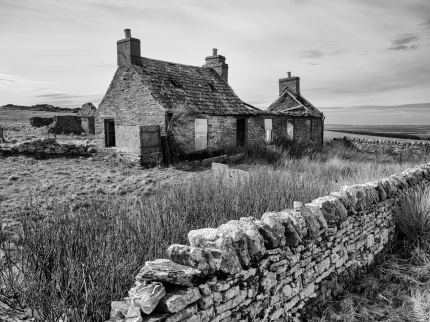 We briefly stopped at the Castle of Mey, one time summer holiday home of the Queen Mother – it was pretty busy there and we only needed to use the loo, so onward… Interestingly, the whole physical geography changed along here – although there were cliffs all along the coastline, just inland it was pretty flat, and the harsh gorse and heather landscape changed to mostly pasture.  Lots of abandoned ‘crofts’ – apparently dating back to the Highland Clearances of the 18th and 19th centuries where tenants were evicted in favour of land being used for sheep grazing.

And so we arrived at John O’Groats, not actually the most northerly point of the UK mainland, but pretty close, and home to that famous sign for the obligatory photograph. Rather like Lands End (by co-incidence we had been there only a few weeks earlier) it was a place to say you had visited, then move promptly on! A couple of miles away is Duncansby Head, yet another lighthouse, and the cliffs are home to thousands of nesting seabirds. 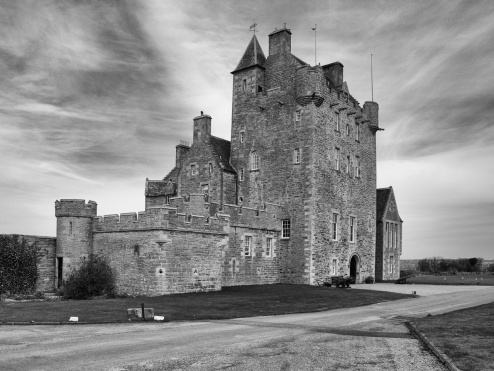 From this furthest-most point on our trip, it was time to head south now, just a few miles to our next overnight stop – Ackergill Tower, just outside Wick. A genuine castle this time, built around 1475 and pretty much in continuous occupation since then, it is now a 33 room hotel standing right next to the sea. Billed as a luxury hotel (and priced accordingly) it almost lived up to our expectations… First up – a seriously imposing building – a big solid stone facade, with towers and turrets etc, and cannons outside the entrance! We ventured to the top of the tower – three flights of stairs up, and then up a narrow spiral stone staircase and out onto the battlements. Given my fear of heights I think I did pretty well. Our bedroom was comfortable, and both the drawing room and huge vaulted dining room were impressive to say the least with wood panelling, plasterwork and huge pictures of the landed gentry former residents.  The food was good (we had booked dinner, bed and breakfast) and although the service was reasonably good, it lacked the polish of other hotels we stayed in on our trip.  What did amuse us was the music playing in the dining room – a little CD player in the corner, playing a single CD of popular Scottish music, over and over again.  Fair enough, although it was weird hearing ‘Auld Lang Syne’ at breakfast in April!

Heading out next day, it was mostly cliffs, beaches and rolling countryside, with a few stops to take in the views. Dunrobin Castle, with 189 rooms the largest castle in Northern Scotland, was our next stop. If you don’t want to tour the building itself, there is a path that takes you down to the shore, and this offers fine views of the exterior.

Passing the village of Tain (the home of Glenmorangie), and the ‘parked’ oil rigs in Nigg Bay, we stopped at the Storehouse of Foulis (another recommendation) for lunch – good food and reasonably priced too.

We spent a good hour at Chanonry Point, just outside Inverness on the Black Isle, as this was recommended for dolphin watching, but alas there were none – the best times are apparently later in the summer, on a rising tide, so that will have to wait until another visit. A beautiful and peaceful spot nevertheless with views across to Fort George on the other side of Cromarty Firth, and down to Inverness (and another lighthouse of course!) 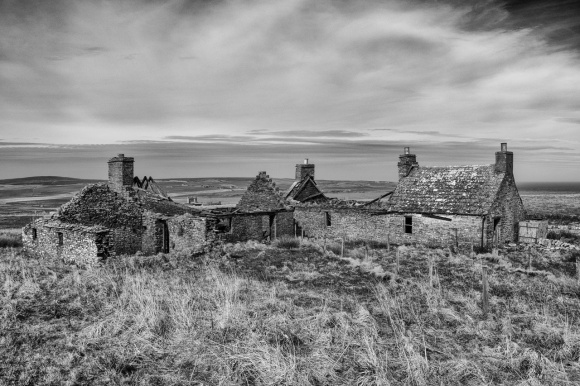